Franco Columbu was the Strongest Bodybuilder of the Golden Era of the bodybuilding and was pound for pound strongest of them all. We all know him as the side kick of Arnold Schwarzenegger from the days of pumping iron or much before. However he had more to him than just being a side kick, he was weightlifting, powerlifting and then a bodybuilding champion. 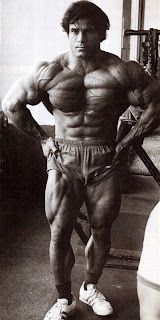 He was not just a bodybuilder who had muscles, he could put them to use to put people to sleep since he was also a European boxing champion. He has won numerous weightlifting and bodybuilding competitions, winning Mr. Europe, Mr. World, Mr. Universe and Mr. Olympia twice (1976 and 1981).He trained Sylvester Stallone for the Rambo movies.

He had set great PR’s on bench squat and deadlift and also on heavy shoulder presses. The most interesting thing was when he competed in world’s strongest man 1977, he was dabbling a refrigerator and had a fall and injured his leg. Doctors declared that the leg was broken, but Franco said it wasn't broken, it was dislocated. If you are already not impressed by his feet’s of strength, one must be impressed by his will and dedication which was put into display when he when through rehabbing his leg and competing again to win the Mr. Olympia title in 1981. Post his accident at the world’s strongest man, he had lot of work at his hand and his efforts are commendable irrespective of where the Olympia of 1981 was fixed or not!

Like Arnold he came from a small village, he was from Sardinia Italy. He conquered the world of bodybuilding and did do small parts in movies made lot of money and became successful.
His best lifts are as follows:
Bench press: 525 lbs.
Squats: 655 lbs.

Machines vs Free weights has always been interesting debate, well let me give you my opinion on the topic based on my experience. Nothing beats training with free weights, if you want to build a strong foundation and solid physique you need to train relentlessly with weights and less of machines. I would say 80% of one’s training should be with free weights and rest with machines. Machines do have their place in training, but they do have to take the back seat.


Physiques like Arnold Schwarzenegger, Franco columbu, Sergio Olivia all emulate powerful physique which comes from training hardcore with free weights.One cannot achieve that strong looking physique with out training with free weights. you got to do barbell rows, dead-lifts, barbell curls, squats, bench press, shoulder press and over head press there is absolutely no substitute for these exercises. If you do use machines as an alternative for these exercises than you can never have that strong and powerful physique.

Do train with free weights and less of machines and see the results and the difference physique.

Posted by Prathap Umesh at 9:38 PM No comments:

Travel and Tranquility, I got the much needed break in my hometown of Udupi. It’s a city in the southwest Indian State of Karnataka. It is the headquarters of Udupi District. Udupi is notable for the Krishna Temple and lends its name to the popular Udupi cuisine.
Tulu is the most widely spoken language in Udupi City. Other languages spoken here include Kannada, Konkani.
The climate in Udupi is hot in summers and pretty good in winter. During summers (from March to May) the temperature reaches up to 40 °C and in winters (from December to February) it is usually between 32 °C and 20 °C.


Places to visit in Udupi are Malpe Beach, Krishna Temple and End point. There are lot of other beaches in Mangalore and other places too.
Posted by Prathap Umesh at 9:36 PM No comments:

Commando Row is an isometric exercise for the core and also a contracting exercise for lats. This exercise gives a good stretch to the lats, it stabilizes your abs. it primarily hits your delts and biceps.

Posted by Prathap Umesh at 7:19 AM No comments:

Arnold Press is better at targeting the front delts than compared to the overhead press. This is a short footage from my shoulder workout today. It’s a unique exercise to isolate your delts and since Arnold invented this exercise, he coined his name.


I use this exercise at the end of my shoulder workout as a burn out. I do high reps on this exercise to tax the delts and spark the growth.

Posted by Prathap Umesh at 7:14 AM No comments: