What’s the first thing you notice when you see a Bruce lee movie? His unbelievable martial art skills and his amazing speed the other important thing you notice is his Aesthetic physique. It’s my tribute to the man who was a perfect combination of body and soul a legendary martial artist and renowned philosopher. Whenever I hear or think of muscularity first name that pops up in my mind is “Bruce lee”, he was lean, razor–sharp cuts, dense muscle not to the degree of professional bodybuilders but chiseled and well defined muscles.

His work ethic and single minded focus was second to none, he had that perfectionist mind set which made him a legend. He was not genetically gift with great genetics unlike our professional body builders; he built his awesome physique with sheer hard work and dedication. Just standing five feet and seven and a half inches tall and weighed around 126 to 145 pounds, he turned his body into an ultimate weapon which not only looked awesome but was also very strong and powerful. 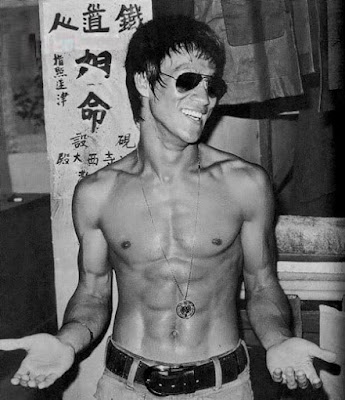 Bruce’s interest in weight training mainly grew as part of martial arts training. He was a renaissance’s man; he had achieved the muscularity, definition and proportion to the same degree as that of body builders of today. Bruce’s main focus was towards strength and speed, the chiseled and ripped to the bone physique was byproduct of his intense training. His body was graceful and tremendously functional; he would leap eight feet in the air to kick out a light bulb in one of his movies. He would demonstrate one inch punch which could generate so much of power that it would send the person on the receiving end flying in the air. Bruce was a pound for pound fighter , his reflexes were so quick that he had to slow down for his movies, so as to capture his punches and kicks on screen, man he was lightening quick. He termed his approach towards physical training as “the art of expressing the human body”. He demonstrated extreme flexibility, lighting quick reflexes, grace and colossal power. He didn’t believe in being huge or big but believed in being capable of converting one’s strength efficiently and quickly.  Bruce had a well-proportioned physique, but his best body part was his abs, it is said that he loved to work his abs and forearms. 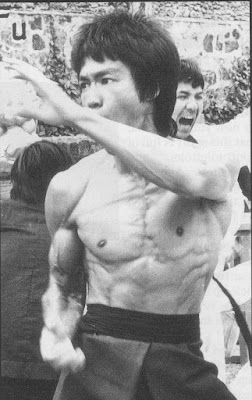 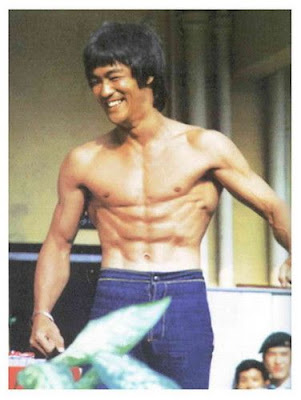 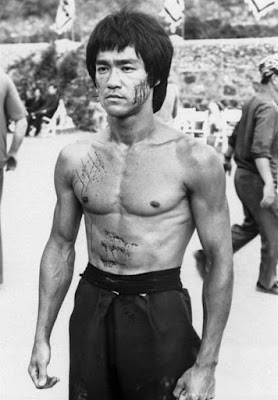 Some of Bruce’s feats of strength are he could perform one hand push-ups or thumbs only push –ups. He was able to support a 125-pound barbell at arm length right in front of him, mind you he weighted between 126 to 145 pounds. How can we forget his one inch punch? That would send the opponent flying in air. He could side kick 300 pound heavy bag slapping against the ceiling. Lee was always on the look out to train his muscles in new and unique ways to stimulate more muscle fibers; he had a huge collection of books ranging from bodybuilding to philosophy in his personal library.

Below is lee’s workout program: 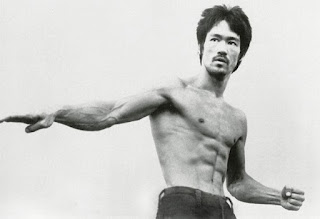 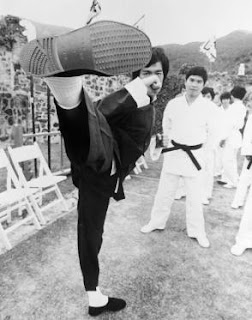 Bruce was well ahead of his time, be in terms of fitness or nutrition, he was a great martial artist and a wonderful human being. He can also be termed as first one who introduced MMA (mixed martial arts) in way because he didn’t not believe or limit himself to one style of fighting.  I would like to conclude this article with one of his quotes on martial arts and fitness, he said “if you’re talking about combat- as it is – well then, baby you’d better train every part of your body!”

Posted by Prathap Umesh at 12:14 AM No comments:

What workout machines should I use to start bodybuilding?

It’s an age old debate as to whether one should use free weight or machines to build good physique. You may ask what workout machines I should use to start bodybuilding. My answer is simple “what every equipment you can find in your gym”.  I am an old school bodybuilder and like to use free weights more often than the machines. However you pretty much need machines too!  Your weight training or strength training should always be the combination of both free weights and machines. Let’s also look at it from a beginner’s stand point, why would a beginner use machines to build muscles rather than free weights, dumbbells and barbells? I think the answer is a no brainer firstly it’s safe and doesn’t need much of understanding of the form unlike a bench press, squat or a deadlift. Secondly every gym nowadays has lot of machines to train and build muscle.

Let me give you my opinion on the topic based on my experience. Nothing beats training with free weights, if you want to build a strong foundation and solid physique you need to train relentlessly with weights and less of machines. I would say 80% of one’s training should be with free weights and rest with machines. Machines do have their place in training, but they do have to take the back seat.

Physiques like Arnold Schwarzenegger, Franco columbu, Sergio Olivia all emulate powerful physique which comes from training hardcore with free weights. One cannot achieve that strong looking physique without training with free weights. You got to do barbell rows, dead-lifts, barbell curls, squats, bench press, shoulder press and overhead press there is absolutely no substitute for these exercises. If you do use machines as an alternative for these exercises than you can never have that strong and powerful physique.

Do train with free weights and less of machines and see the results and the difference physique.
Please subscribe to my YouTube channel and shoot me any questions you have related to strength training, bodybuilding and diet.
Posted by Prathap Umesh at 12:12 AM No comments:

I am sure you are tired of having skinny legs or have faced issue with bring up your legs to match your upper body. If this is what has been bothering you then you are at the right place to fix it. When I say build massive legs in minutes, don’t get me wrong I am not promising your legs are going to look like big ramy’s legs. It takes years and years of training to get massive legs.  What I want you to understand is by following what I am going to say you surely will be on track to get your legs huge and defined.

Firstly let’s look at why do we need big and strong legs. Why is the quad strength so important I ask? Many people give their legs a weak workout at best or skip over them completely in favor of training their arms or chest. This mistake of not training legs not only takes away from strength but also ruins the overall flow of the body. Training legs help pack on lean mass it also helps keep of fat. It’s a known Fact that when you do a heavy, intense leg workout, your growth hormone spikes.

I have always loved challenges and nothing challenges you in the gym then doing heavy set of squats both back and front squat. So my number one exercise is back squat followed by heavy high rep leg press. Here are two videos demonstrating the same. Do both variation of squats with a rep range not less than 10 and throw in a set of 4 to begin with for 3 weeks and then increase the sets.

I also suggest adding in leg extension and some hamstring work. I will detail the each sub muscle in legs in my future article.

Please subscribe to my YouTube channel and shoot me any questions you have related to strength training, bodybuilding and diet.
Posted by Prathap Umesh at 11:46 PM No comments: