Hindu push-ups is a great exercise used by wrestlers from India, Iran and Japan mainly Asian countries. The exercise is named as Hindu as it’s believed to be originated from India. Even today it’s a staple exercise in an Akhada which is the place where wrestlers train and it’s more like a dojo. It hits multiple muscles like Arms, legs, core and shoulders. This a great exercise to get in shape quickly, it has to be done with high repetition say like 30- 35 reps and if you can do more the better. 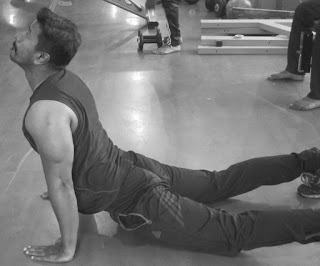 It helps develop one’s endurance and helps build great stamina. It is also said to strengthen the internal organs and because of the breathing technique involved. One of the all-time best wrestler to come out of India was Gama. He is said to more than 4000 of these Hindu squats to build his phenomenal leg strength it’s not a bodybuilding workout but more like strengthening and conditioning workout. If one does giant sets of Hindu push-ups and squat, it will build great strength and functional strength will sky rocket.

Do try this work out and you will get in shape in no time.
Posted by Prathap Umesh at 6:51 AM